A gross margin (GM) is calculated by taking the Gross Product from a profit centre and subtracting all of the direct costs from that same profit centre. From that point a producer can then subtract all of the profit centre overheads that are directly related to that profit centre, which will give them a Contribution Margin (CM). To figure out the actual profit or loss of a business, they then need to subtract all of the business overheads. In addition to this, a true profit or loss will include all of a producer’s labour, equipment, opportunity costs, and depreciation and will also account for inflation. 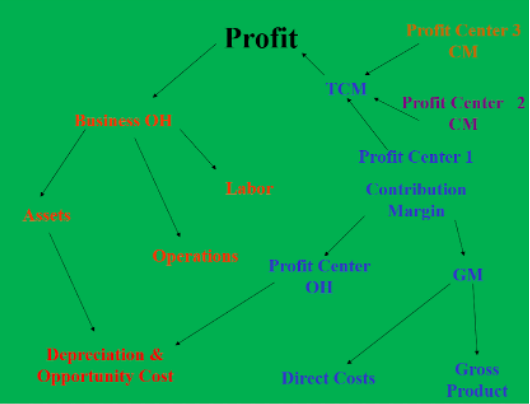 For the purposes of this mentorship program, concern will only be given to the grazing profit centre and the focus will be on calculating the contribution margin of that profit centre. Every farm is different and therefore the business overheads will be different on each operation. Calculating out the direct costs and including any profit-centre overhead costs, such as labour and equipment, will help guide decisions for the grazing profit centre on the farm. 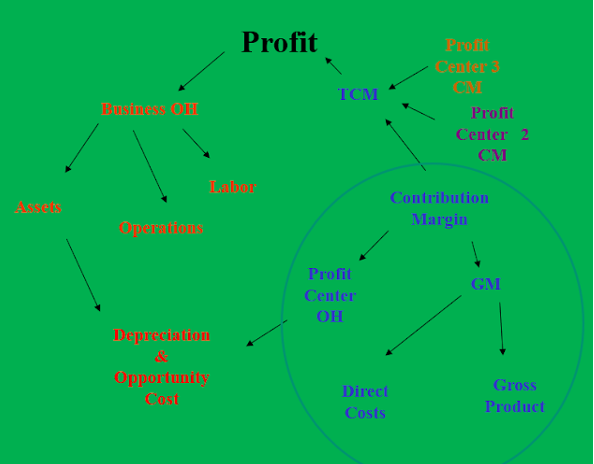 When looking at a grazing profit centre, the Gross Margin needs to be calculated. This is not always as clear in a grazing profit centre as it is in other profit centres. It is very important to use market values for the producer’s area because each area can be different. Breaking this down as a CM will help the producer make decisions about grazing. From the CM, they may decide that it is better to graze their own livestock, someone else’s livestock or perhaps to send their livestock elsewhere to graze.  The margins will impact the decisions. Other factors that will impact these decisions are human resources and risk factors, but it helps to have the economics complete and known in order to help make those decisions. Every farm has its own context.

Opportunity Rent - When a producer owns the land that they are grazing, they still need to assign a rent value to the land. This needs to be set at market value for their given area, specific to the type of land. What would someone else pay in rent for that same piece of land? What is the producer paying in rent for similar land? When they are calculating their gross margin, they are looking at economics. A producer should use an opportunity rent on owned land, not their actual land payments. The land payments go into the producer’s financial calculations, not their economic calculations.

Contribution Margin Ratio (CMR) - The contribution margin ratio is a benchmark that can be used to help determine if a producer is making a profit or not. In any profit centre, the CMR is calculated by dividing the CM by the Gross Product. If a pasture produced $75/acre and the direct costs and profit centre overheads combined worked out to $50/acre, then the CM is $25 and the CMR would be $25/$75= 0.33 or 33 per cent. A producer can set their own targets for a CMR. Each pasture needs to produce enough to offset the costs and still be able to contribute to cover some of the business overheads.

Rent Ratio - A rent ratio is another benchmark that can be used to see if the land rent is reasonable for a given situation. Again, producers need to set their own targets as every farm has its own context that it needs to work within. Rent ratio is simply the rental rate divided by the gross product. A desirable rent ratio might be less than 30 per cent but every farm may have a different target for a rent ratio. In this example, if the rent was $30/acre, then the calculation would be $30/$75= 0.40 or a 40 per cent rent ratio. This ratio can help differentiate if it is the grazing costs that are too high or if the producer is paying too much for land rent.

Unpaid labour on the farm is a very undervalued asset. It is important to include it in a producer’s calculations. Labour rates should be set at appropriate market values for the task at hand. If a producer is doing their own farmwork, the rate should be set accordingly. Similarly, if the producer is doing management work, this rate should also be set at market value. What would it cost the producer to hire someone to do the job? For a business to be repeatable, it needs to be able to cover its labour costs, without the need for unpaid labour.

Equipment costs also need to be accounted for in every profit centre analysis. To do this properly, a producer would need to include all of the costs associated with running each piece of equipment, including repairs, fuel, oil, maintenance, depreciation and opportunity costs. Again, each farm will have its own context and the need or desire for equipment will be different. It’s beneficial to understand the economic value of a farm’s equipment to ensure that a producer can make good decisions within their farm’s context. For the purpose of simplicity, a producer might prefer to assign appropriate market values (hourly rates) to each piece of equipment as if the producer were renting them. These rental rates would already assume to have the repairs, fuel, oil, maintenance, depreciation and opportunity costs accounted for within the hourly rate. A producer could compare values of similar pieces of equipment in other industries. For example, a farm tractor at a value of $75,000 might be comparable to the rental rate of a rubber-tired backhoe of similar value. If the producer would like more accurate equipment costs, a full analysis is recommended.

One of the trade-offs that can occur within a profit centre is the reduction of labour as compared to the amount of capital invested in supplies and equipment. Labour is a major cost associated with most AGS and can sometimes increase costs a great deal. An economic breakdown will help producers decide if additional capital invested in equipment would offset the reduction in labour that it would allow. For example, a producer could calculate the costs associated with the capital cost of purchasing one water system and the labour to move it around to multiple locations versus the cost of buying multiple stationary water systems and not needing additional labour to move them around. A few other considerations might be owning versus renting a post pounder, using temporary fencing or installing more permanent fences. Every farm will have to make its decisions based on its economics and context but understanding the labour values can help make those decisions easier.