A grazing chart is a tool that is used to calculate the yield produced on pastures. There are many different ways to calculate yield such as:  Animal Days per Acre (ADA), Stock Days per Acre (SDA), Animal Unit Months (AUM), Animal Unit Days (AUD) or Pounds per Acre. The producer can decide on the measurement they wish to use; they just need to be aware that there are different tools and that comparisons made with other producers may not always be relatable. It is important for a producer to keep to the same method in order to compare their own numbers year after year. In this manual, ADAs will be used, but any of the above methods are just as valid.

ADA is a measure of how much forage is consumed in each pasture. A key component to using ADA is that the animal value needs to be adjusted depending on the class and the size of livestock being grazed. The ADA value of the herd and the amount of time the herd spends in each paddock needs to be recorded. Each area can then be added up and the overall yield in ADAs and dollars per acre can be determined. As the animals grow throughout the season, the animal day value can be increased slightly to account for the increase in consumption.

When calculating a bull’s AD value, characteristics like his weight and whether or not he is currently breeding the herd need to be taken into consideration. A producer can use their own judgment on the bull’s AD value based on these considerations. When it comes to other species of livestock, a producer can use the same considerations. A goat or a sheep will eat about 1/8 of what a cow does so that would make them approximately 0.19 AD (0.2 AD would be close). Would 200 chickens consume the same amount of forage in a day as a 700-pound yearling?

Example - One 700-pound yearling grazing for 100 days would be 100 AD. Or, if a producer had 100 yearlings that each weighed 700  pounds grazing for one day, they would have 100 AD. If that producer had 50 pairs with the calves, averaging 300 pounds (2.0 AD) grazing for one day, they would have 100 AD. The value needs to be adjusted to get an estimated amount of forage consumed for the day. A cow-calf pair that is valued at 2.0 AD will eat approximately the same amount of forage as two 700-pound. Yearlings.

Another thing to take into account is that the AD should be adjusted as the animals grow. Those 50 pairs valued at 100 AD will have bigger calves later in the season. As many times in a season as a producer sees fit, that AD value can be increased on the grazing chart to compensate for the increased consumption. At the end of the season, those calves will be averaging over 500  pounds so the ADV will be up to 2.25, thus showing an increased AD of 112.5 instead of 100.

A grazing chart can also help a producer plan a grazing rotation. Each paddock is listed on the chart and shows the dates that each paddock is grazed. This can help a producer estimate when and where they will move the herd and to plan out their graze periods and rest periods. It can also help them to track precipitation throughout the year. This is important when looking back as precipitation can affect yield a great deal throughout a grazing season.

Consideration also has to be given to how heavily each paddock was grazed. Some years, depending on precipitation, a producer might want to leave more or less residue. The grazing chart can record this.  When the grazing season is complete, the producer adds up all of the ADAs for each paddock. From there, they can then convert that into dollars per acre. This helps them to see the difference in production between different paddocks. It is very valuable information as it can help them to determine a margin for their economic calculations and provides valuable insight for future grazing decisions.

The use of a grazing book is also quite common in order to keep track of yields on pasture. This could be a small paper copy that a producer carries with them, an office version that gets filled out daily or even a record of moves kept on a smartphone. How many animals, what ADV and when they were moved all needs to be tracked in a grazing book. From there, yields at the end of a season can easily be calculated. 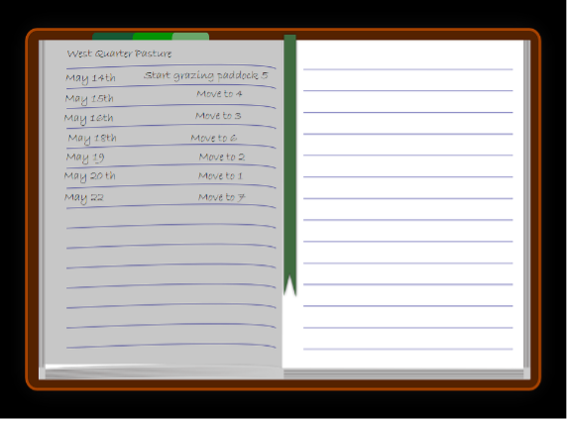 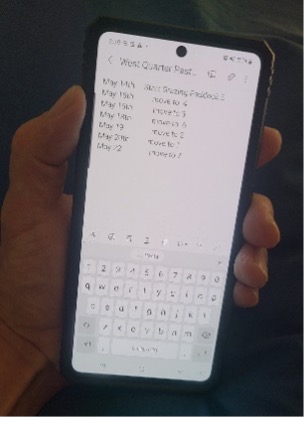 Having a pocket grazing book, or keeping track on a phone, are both great options. It is recommended that producers also record their information to a backup location (daily or weekly) in case the book or phone becomes lost or damaged. A record-keeping book in the office can easily be used alongside a portable version but can also be used on its own.  Grazing books are great tools, as long as they are filled out on a daily basis. Having a map to coincide with the grazing book to help record the daily moves can also be quite reliable. The main reason for keeping accurate records is to have the ability to calculate the profitability of a profit centre. Determining the margin on each pasture is a valuable decision-making tool.

As previously discussed, there are a few options for online grazing management software, such as Pasture Map and MaiaGrazing.

When you’ve read and watched this information you are now ready to move on to Module 6 - Extended Grazing.