The most economical winter grazing option is an AGS of a producer’s summer pastures. Good summer management allows a producer to reduce fall and winter-feeding costs by grazing late into the dormant season. A farm may not be able to change its growing season, but it can extend its grazing season. If a producer has managed their grass well during the summer and has good-quality forage when the killing frost hits in September, they end up with good-quality standing hay in their pastures.

One tool to help extend a grazing season is the use of a disposable herd. A disposable herd is a second herd that is used to manage the spring flush. Once the spring flush is over, that herd can be removed from the pastures, which allows more acres for a farm’s primary herd to graze for the rest of the season. Many producers also use this same strategy by haying or silaging a field on the first rotation and then graze the regrowth later in the season. 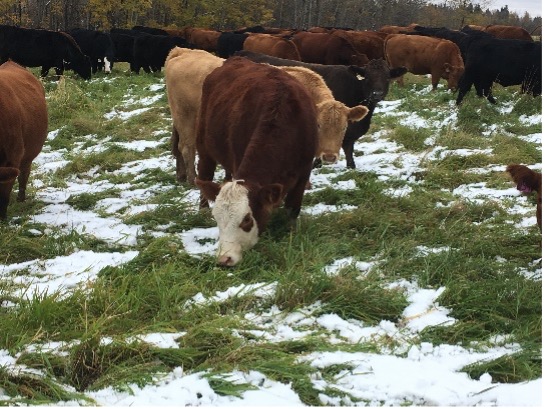 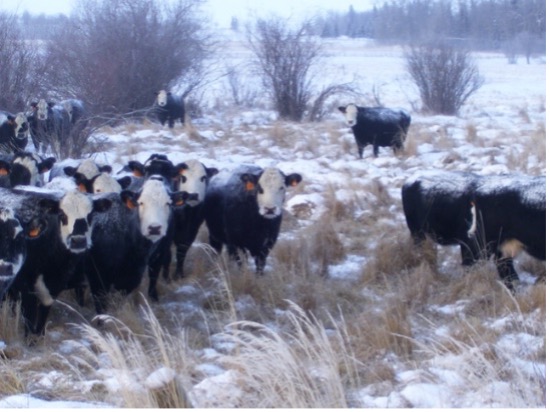 Another dormant season grazing strategy can simply be to save pasture all season with the intent of grazing it in the fall or winter. The quality of forage will most likely be insufficient (depending on type) and may require supplementation.  Lowland areas can work well with dormant season grazing, as in most of these riparian area forages are not very nutritious or accessible in the summer due to the high-water content. They dry out in the winter and are much easier to access once the ground freezes. A supplement might be needed depending on the class of livestock and a feed test is always recommended. Supplementing on pasture tends to be more economical than feeding a full ration.

Residue grazing is another great way for a producer to reduce their feed costs. This is simply utilizing the chaff and straw that comes out of the back of a combine and allowing livestock to graze it in the field. A producer can just turn off the spreader on the combine and that leaves the residue in swaths all across the field. Alternatively, they can add a chaff buncher or a chaff collector and leave the residue in small piles. This can also include grazing corn stalks or stubble. 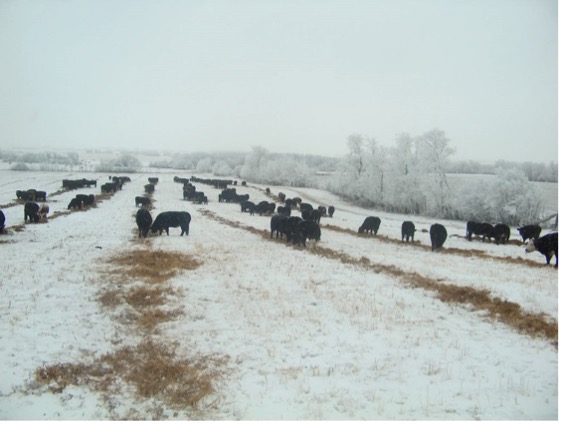 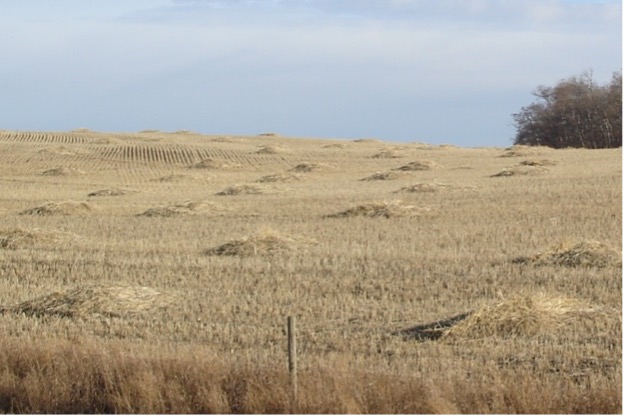 A feed test is always recommended. A mineral package and some supplemental feed might need to be added to the ration. Even if the feed is high enough in protein and energy, mineral imbalances are a risk when only supplying a monoculture ration (just one type of plant). It is recommended to add a bale or two of hay every day to add some polyculture to the ration. This will help ward off any nutrient imbalances that can occur with a monoculture crop. If there are enough weeds in the crop, or if the producer was able to interseed a cover crop, then the crop becomes a polyculture and the risk is lower.

Annual crop grazing is when a full crop is grazed by the animals. It may also be referred to as swath grazing; however, the crop is not always swathed prior to grazing. It may be a salvage crop that is weather damaged, it could be a poor crop not worth combining or it could be a full crop planted specifically for grazing. The type of crop can vary but, no matter what the crop is, a producer will still need a feed test and may also need to compensate for any shortfalls in the diet. A polyculture in the crop is recommended. Many people use cover crops, cereal crops or corn as grazing crops.

Warning. When grazing on annual cropland, it is important to have a back-up plan for when it gets wet. A herd of livestock can do a lot of damage to the soil structure. The wetter your environment, the more the risk. Having a solid pasture or a sacrifice area handy is good to have in the grazing plan. 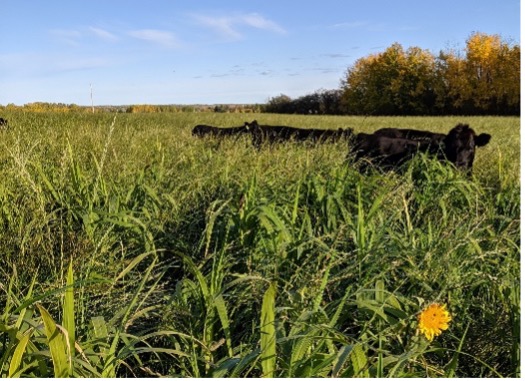 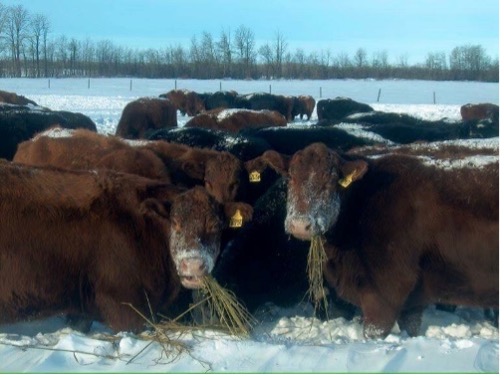 Bale grazing is a great way to lower traditional feeding costs. It is a form of feeding that is done on pasture using a grazing mentality. Similar to residue or swath grazing, a producer rations off a set of bales with a planned graze period. A recommended graze period would be from three days up to 21 days. The producer still brings in feed, but instead of feeding it on a daily basis, the animals graze it. If done right, this can lower labour and equipment costs substantially for the winter-feeding period. In addition to the cost savings, this method also reduces the need for manure hauling and adds litter to the soil surface. The leftover material and manure from bale grazing greatly increases the water-holding capacity of the soil and adds fertility to the system. Future forage production increases should be added into the calculations as well. 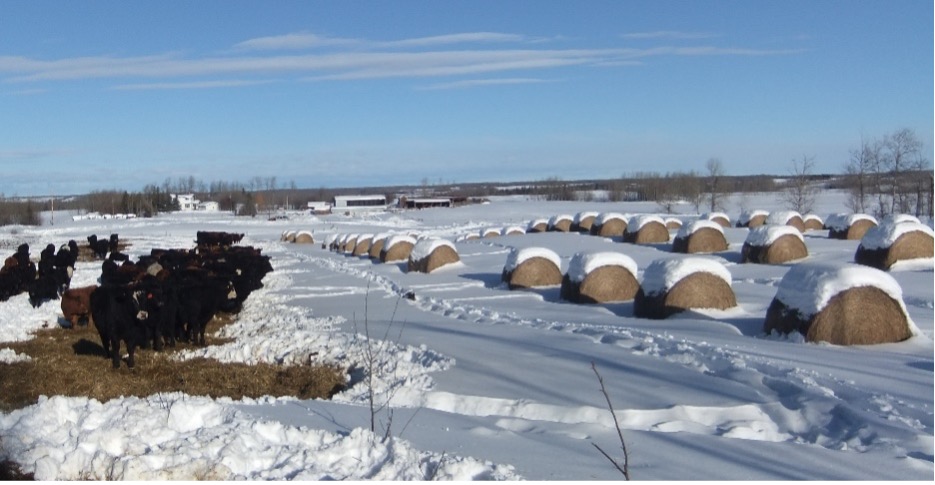 A variation of this could also be silage grazing, where the livestock has access to silage that is rationed off with a wire instead of being fed to the cattle on a daily basis. This could be silage grazed in the form of bales, tubes or piles. The idea is to lower the labour and equipment costs. 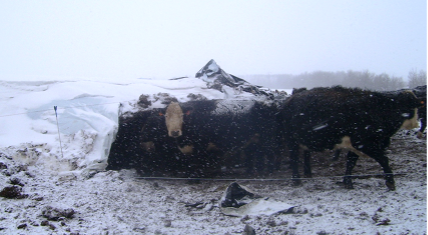 It is important to calculate the full costs associated with a winter-feeding system. Most often it is only the feed cost that is accounted for when planning for winter feeding. Producers need to account for the labour and equipment costs associated with winter feeding as well. This would include time spent feeding for the operator, equipment repairs, fuel, maintenance, depreciation, opportunity cost, etc. This can be difficult to figure out, as there are a lot of considerations to factor into the calculation. There are many options available to help producers determine a true yardage cost associated with feeding livestock. Again, a producer can also roughly estimate these costs by giving a reasonable hourly rate to the equipment (comparable to another industry). For example, a tractor used to feed could be comparable to a rubber tire backhoe. What is the market value of a backhoe in the producer’s area on an hourly rate? A comparable rate can be used to value equipment used in a winter-feeding strategy. Included is a winter-feeding calculator to help compare different strategies.

Two other economic factors to include in a producer’s calculations is the cost of hauling manure and the future production value of the feed waste and manure left behind. If a producer needs to haul manure after a winter-feeding period, these labour and equipment costs need to be factored into the overall economics of each system. The future production value of the waste should also be included. If this waste is left in beneficial locations, the increased water holding capacity and added nutrients can have long –lasting, positive effects on soil health and production. There are also losses of nutrient value that needs to be accounted for in the piling, loading and spreading of manure. A large portion of nitrogen is lost during the manure hauling process. If composting, labour and equipment costs need to be accounted for. The gain in production from a production practice needs to be more than the costs associated with it.

When you’ve read and watched this information you are now ready to move on to Module 5 - Extended Grazing.